A Peek Into: the Fishing CAS Club 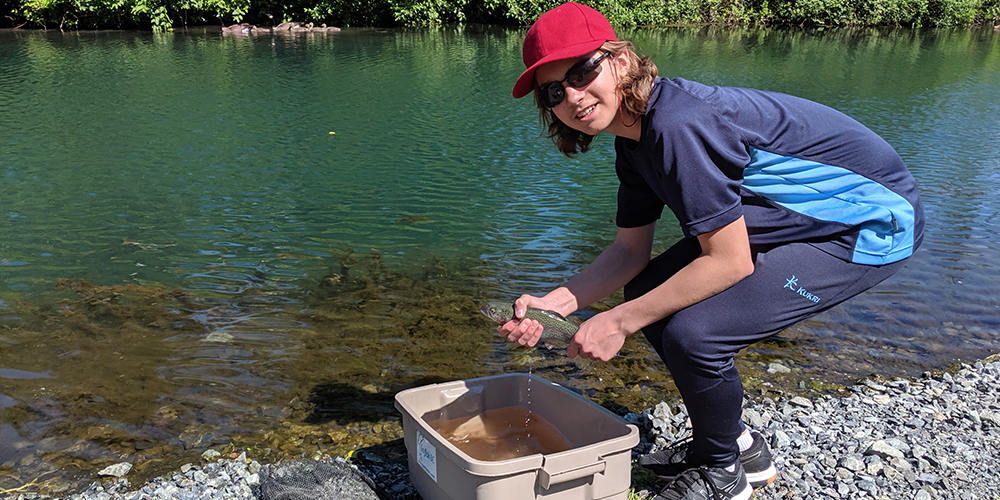 A Peek Inside
The Fishing Club

Offered to students in Grades 6 to 10, a new lineup in the Creativity, Activity, and Service (CAS) Club rotation has students learning a lifelong, lively new skill—fishing! Hosted by Mr. James Willms and Mr. Scott Rinn, the Fishing Club helps students form an appreciation for fishing while learning how to fish responsibility and sustainably.

Together, the group headed off to the Fraser Valley Trout Hatchery in Abbotsford, BC to put their new skills to practice.

The trip started off with a fish species identification class, where students learned how to spot Rainbow trout, Brook char, White Sturgeon, Cutthroat trout, Steelhead, and Kokanee. Afterwards, they learned the process of raising hatchery fish and the importance of stocking BC lakes with fish.

Did you know?
The Hatchery raises and releases about 1 million fish per year into over 400 BC Lakes.
The goal is to maintain the most robust, freshwater fishery in North America.
Funding from BC fishing licenses goes directly to Freshwater Fisheries Society.

Students also learned how invasive fish species impact trout fisheries, including the unintended effects of goldfish on local fish populations. Students witnessed this effect first-hand, when a small trout was placed into a tank with a largemouth bass.

Did you know?
When presumed dead, people often flush goldfish down the toilet. However, goldfish can survive on minimal oxygen, and this sudden rush of water (oxygen) over the goldfish's gills will jolt it awake. In some waste systems, this then introduces them into local water sources. Goldfish can lay up to 1,000 eggs per time and lay multiple times during their life. When introduced into an ecosystem not set-up to maintain a balance with this many goldfish, the fish population can be decimated.

After learning how and why hatcheries operate, students had a chance to practice the skills and information they learned in class—knot tying, types of tackle, casting techniques, and proper catch-and-release methods—by fishing from the hatchery. Students were able to catch fish and practice handling and releasing them in a safe manner. A couple of students were even brave enough to kiss the first fish they ever caught! Others learned the finesse and timing of casting a fly line.

Back to Blog Home