The Secret to the Kinderbuddy Program at Meadowridge 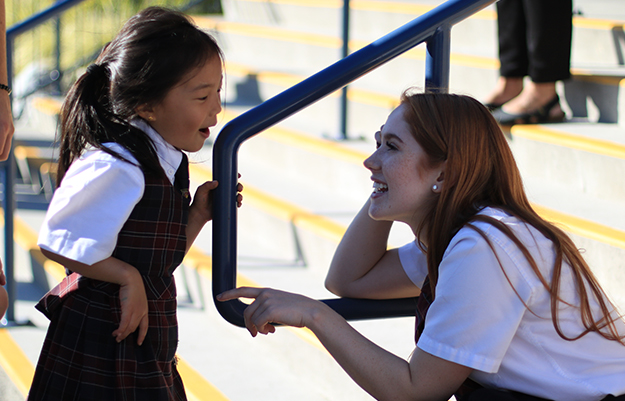 Five educators are huddled in a small room just off of the library. Our post-secondary counsellors, Mr. Al Graveson, Mrs. Brianna Just, and Mrs. Cathy White, are joined by our kindergarten teachers, Ms. Jennifer Maynes and Ms. Tamara Warner. The group takes their seats and gets going, not missing a beat—they've done this before. "I need someone who has a big personality," Ms. Maynes begins.

Our post-secondary counsellors listen intently while Ms. Mayne continues: she lists off a few more qualities—loyal, principled, warm—and waits. Not a minute passes before a suggestion is made, and resounding nods from around the table endorse it: a match has been made. Mrs. White picks up a black sharpie, carefully crossing out a smiling face from the page in front of her. On to the next.

The kinderbuddy draft is underway.

For our graduating class, September marks the start of a nine-month long, mad dash to the finish line. Students start the year with an ever-growing, mile-long list of assignments, essays, and due dates. And yet, they will always ask about one thing before all-else: who is my kinderbuddy? 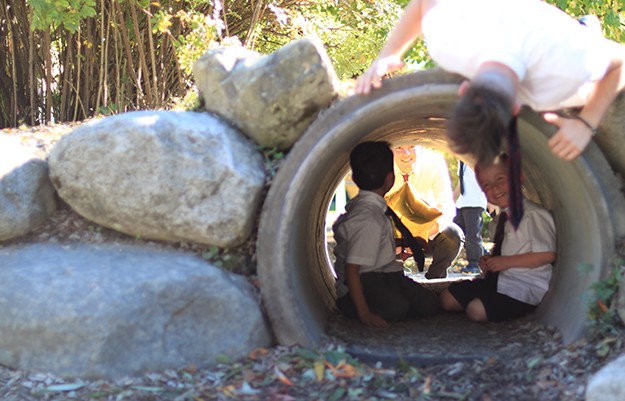 In an effort to influence pairings, students have gotten pretty creative over the years. The selection team has been witness to covert scouting missions, coffee cards as tokens of bribery, impassioned pleads, and attempted dibs. All attempts are fruitless: the selection process is impervious to trickery and persuasion.

So, who decides? And how do they decide? It may surprise you to learn that pairings are not made at random. They are a result of thoughtful deliberation and discussion. Once every year, the kinderbuddy selection team meets, dedicating an entire afternoon to just one thing: making matches.

Our kindergarten teachers are the first ones up, taking turns introducing each of their students. They'll talk about their personalities—outgoing or shy, boisterous or relaxed, talkative or more reserved—and about their ideal, grade 12 match. It goes beyond matching trait for trait, and there is genuine discussion about each and every pairing.

So, who decides? And how do they decide? It may surprise you to learn that pairings are not made at random. They are a result of thoughtful deliberation and discussion.

The team takes their responsibility in earnest, and they have fun with it.

"I need a buddy for my guy who is very principled and loyal," Mrs. Warner starts up, "he'll respond really well to hugs and a strong role model." Across the table, the counselling team listens, waiting, as each new piece of information brings them closer and closer to the right match. When one of our kindergarten teachers concludes, our counsellors will often suggest a name in unison; it's that clear.

Ms. Warner's chimes in. "I have someone whose vocabulary is very high, and he's very chatty: he wants to talk." She rattles off a few more traits, and our counsellors jump to offer a name. Ms. Warner, beginning to write the buddy's name down pauses, "Is he playful, too?" The counsellors nod. Match made.

Observing the team, it's clear there is no set formula to follow. The pairings are a result of the team's genuine understanding of each of their students. It goes beyond the surface, beyond hobbies or gender or shared language. The team pairs up students who will bring out the best in each other—not just for our kindergartners, but our graduates too. With every match made, the excitement is palpable. The room lights up when a pairing so perfectly obvious is made.

And so the afternoon goes: one by one, duo by duo, matches are made. During the entirety of the afternoon, not one match stumps the team. Some may have been trickier, and required more consideration, but each and every one—all of the duos made—were purposeful. It's no wonder, really, why the program is such a success.

The bond between buddies is strong.

They'll talk about their personalities—outgoing or shy, boisterous or relaxed, talkative or more reserved—and about their ideal, grade 12 match. It goes beyond matching trait for trait, and there is genuine discussion about each and every pairing.

"A lot of buddies, even after convocation is over, will come back to visit their kinderbuddy," Mr. Graveson—whose own daughter, Shauna, was invited to attend the wedding of her former buddy—explains. These stories are not uncommon: buddies write to one another as pen pals, extended birthday party invitations, and our graduates will often hover nervously during pick-up time to "meet the parents".

Late September, the buddies met up for the very first time. Thirty-three excited, energetic kindergarten students met up with their equally enthusiastic grade 12 buddies. While the buddies played hide-and-seek, climbed the playground, ran, jumped, and made mud pies, one thing was clear: the team got it right once again. 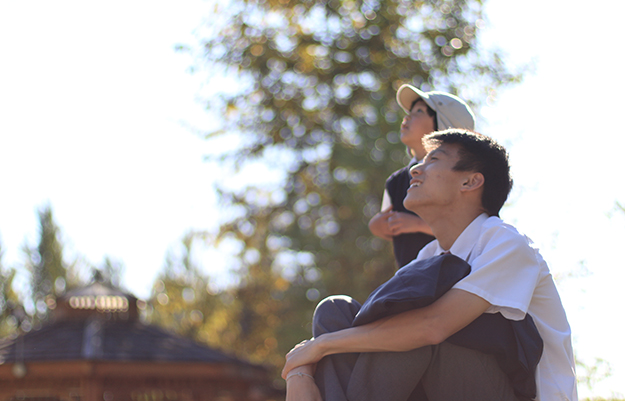 << Back to Blog Home

Challenging and Reframing Negative Self-Talk
Catch up with Poppy Welsh '16
Grade 3 enjoys campfire story with children's author
New Home Language Books in the Library
Why we donated our MEID
Gryphons of the Month: June 2021
Gryphons of the Month: April 2021
Alumni Focus: Devyani McLaren '17
Getting Prepared for a Career in Medicine during the Pandemic

Our Mission Statement
Learning to live well, with others and for others, in a just community.Junior Kindergarten to Grade 12